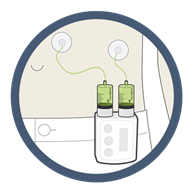 NeuroDerm Ltd., has appeared previously on our pages when we first covered its continuously subcutaneously delivered levodopa/carbidopa (LD/CD) solution for treating Parkinsons disease. Now the company has started enrolling patients in a first efficacy trial of its ND0612H.

NeuroDerm’s ND0612H, administered through a belt pump, is designed to deliver steady LD/CD levels and improve motor fluctuations that cannot be adequately controlled with oral therapy and might otherwise require surgical intervention.

The newly enrolling multicenter international phase II clinical study will compare the efficacy, safety and tolerability of ND0612H to the baseline oral standard of care. It takes the form of a 28 day multicenter, parallel-group, rater-blinded, randomized pilot phase II study (designated 006) will investigate the efficacy, safety, tolerability and pharmacokinetics of two dosing regimens of ND0612H and compare them to the baseline oral standard of care. The study is expected to enroll a total of 36 advanced Parkinson’s disease patients.

C. Warren Olanow, MD, Professor of Neurology and of Neuroscience at the Mount Sinai School of Medicine in New York City stated; “Previous studies demonstrated that continuous subcutaneous delivery of ND0612H has the capacity to produce stable plasma levodopa levels that currently can be reached and maintained only by treatments that require invasive surgery. In other studies the company demonstrated that continuous subcutaneous delivery of the low dose product, ND0612L, as an add-on, can improve motor fluctuations without causing an increase in dyskinesia, benefits that are similar to those obtained with invasive therapy such as deep brain stimulation and LD/CD intestinal gel, but avoiding the potentially serious side effects associated with those procedures.”

“This trial is intended to produce additional evidence that ND0612H is a viable alternative for advanced Parkinson’s patients who suffer motor complications that can no longer be satisfactorily controlled with current optimized therapies.”

“This first efficacy trial of ND0612H marks an important milestone in its clinical development. Advanced Parkinson’s disease patients who suffer motor complications that cannot be adequately controlled with current therapy face limited treatment options that include surgical intervention that may be associated with serious adverse effects and death. NeuroDerm is committed to provide advanced stage patients with a new therapy option that will be a safe, simple and effective alternative to current surgical treatments,” said Oded S. Lieberman, PhD, MBA, CEO of NeuroDerm.